You are here: Home / Health / Medicine / Working on suicide prevention 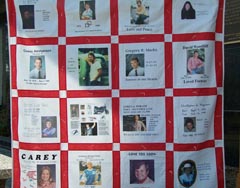 Suicide is a serious public health problem in Wisconsin. In 2006, suicide accounted for 72% of 919 violent deaths in the state. A new focus on suicide prevention aims to keep firearms and prescription medications away from those who may be at risk. Pat Derer is co-founder of HOPES – Helping Others Prevent and Educate About Suicide – and says it’s important to pay attention, and take action quickly.

“If you recognize signs in your loved one, and you know they’re going through some issues, you need to ask them if they’re thinking about suicide, and if they give you a ‘yes’ answer, you need to seek professional help right away,” Derer says.

Gail Scott is a registered nurse with Jefferson County, and says that’s how she was able to help her son P.J., who struggled with depression and had two suicide attempts. “I’m not saying that absolutely every suicide is preventable,” says Scott. “But I do think a lot of them are preventable.”

Derer says Wisconsin had 724 suicides last year, compared to 199 homicides, and the state’s suicide rate remains higher than the national average. Advocates say keeping firearms locked up, and limiting the amount of prescription drugs accessible in the home, can help prevent suicides, which are often impulsive acts.