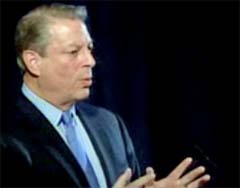 Former Vice President Al Gore says America is close to the “political tipping point” on what he calls the “climate crisis.” Speaking at the convention of the Society of Environmental Journalists in Madison, Gore said he’s optimistic that the shift will lead to action on legislation and treaties.

World leaders and climate scientists will gather in December in Denmark for what many analysts are calling the most important conference of its kind since the signing of the Kyoto Protocol 12 years ago.

Citing recent studies and declarations from scientists around the world, Gore says there’s now no doubt about the “climate crisis.”

Gore expects action soon on legislation and treaties that he says would “put a price on fossil fuels,” encouraging greater use of renewable energy sources. He says that would not only benefit the world’s environment, but also its economic and political stability.