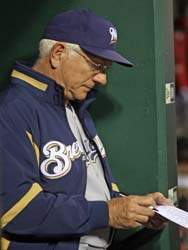 Milwaukee Brewers manager Ken Macha will be back for a second season in 2010.  Brewers General Manager Doug Melvin made that announcement before yesterday’s regular-season finale in St. Louis.

The Brewers finished 80-82 under Macha, but were bogged down by injuries throughout the season.

Interim pitching coach Chris Bosio and bullpen coach Stan Kyles will not be offered contracts at this time, but are said to be candidates for coaching positions in the organization.