You are here: Home / Sports / Round 1 goes to Favre and the Vikings 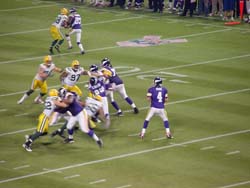 If there were any questions about Favre still being able to get it done, they ended Monday night, after he completed 24 of 31 passes for 271 yards, 3 touchdowns and a quarterback rating of 135.3.

Favre admitted to  being nervous before the game, comparing it to the pregame emotions that he had in Oakland, playing after his father passed away.

AUDIO: Brett Favre says his nerves got the best of him :12

Two of Favre’s touchdown passes came in the first half, a 1-yarder to TE Visanthe Shiancoe, a 14-yarder to Sidney Rice.  His third scoring strike was a 31 yarder to Bernard Berrian that gave the Vikings a 28-14 lead in the 3rd quarter.  In each case, he had all day to throw the football.  Not only didn’t the Packers sack Favre, they really never even came close.

Favre said after the game that it wasn’t about revenge.  Regardless, Favre sent a message that he can still play.  If he and Adrian Peterson can stay healthy this season, then the Vikings stand a good chance to win the NFC North Division.

For the Packers, it’s the same old problems.  A struggle to run the football and an even tougher time protecting quarterback Aaron Rodgers.  He went down 8-times last night.  Viking defensive end Jared Allen had 4 1/2 of those 8 sacks by himself.  And the Packers, through 4-games, have already given up 20 sacks.  That’s more than the entire 2007 season when the Packers allowed 19.

AUDIO: Daryn Colledge on inability to protect the QB :18

Not keeping the heat off of Rodgers has resulted in fewer opportunities for his top receivers down field.  In fact, during one stretch from late in the 2nd quarter to midway through the fourth quarter, Greg Jennings and Donald Driver combined for just seven catches for 86 yards.  Finally when the Vikings took a 30-14 lead, Rodgers was able to get the ball moving again.

The Packers are off today as they enter their bye week.  The team hasn’t released it’s bye week schedule yet, but the players will at least report on Wednesday to start working on corrections from the Viking game.

AUDIO: Mike McCarthy on his team’s plan for now :22

Following the bye week, the Packers host the Detroit Lions on Sunday, Oct. 18 at Lambeau Field.