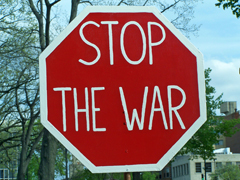 Activists expect to be disappointed, by President Barack Obama’s Afghanistan announcement. Steve Burns, program director for the Wisconsin Network for Peace and Justice, says it’s discouraging that proposals to de-escalate and withdraw were never given serious consideration by the president, during weeks of White House discussions on the war.

“Personally, I can’t say that I’m surprised by it,” said Burns. “I have to wonder about all the young people who worked so hard to put him into office, because they thought he represented change. It’s clear on the Afghanistan front, that he doesn’t represent change.”

“I think from the very outset, the debate in the administration was about how many additional troops to send, not whether to send additional troops,” said Burns. “And I think de-escalation was completely taken off the table, at a very early stage.” Obama is expected to announce at West Point this week that as many as 30,000 additional U.S. troops are headed to Afghanistan. “We’re going to have more than a hundred thousand troops propping up a corrupt government, whose president (Afghan President Hamid Karzai) was elected through massive vote fraud,” said Burns. “I really have to wonder what the president is going to say to those West Point cadets. Is he going to tell them that they’re fighting for democracy?”

Burns expects the addition of more troops to the war will be open ended, and that in the months ahead, generals will be back at the White House asking for more. He sees parallels with the U.S. experience in Vietnam. “President Johnson had exactly the same experience,” said Burns of the president who, like Obama, inherited a conflict from his predecessor. “I think that’s what is going to happen here, that six months from now we’re going to hear from the military that we need to send even more troops.”