You are here: Home / Business / Trouble in Toyland 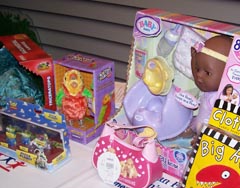 The annual “Trouble in Toyland” report from WISPIRG looks at a sampling of toys available in stores this holiday season.

WISPRIG director Bruce Speight says one of the main issues they look for are choking hazards. In the past two years, 13 children nationwide have choked to death on toys or other items marketed towards children.

Speight says parents should consider using the tube from an empty roll of toilet paper to measure any small parts of a toy. If a part can fit inside the tube, then it should be considered a choking hazard and not given to any child under the age of three.

The report also shows toys are still on the shelves that contain dangerous chemicals or substances such as lead, which can cause developmental problems.

Speight says parents also need to be careful when buying toys that make noise, since they can damage a child’s hearing if they are too loud.

Speight says recent changes in federal law are making it easier to get dangerous toys out of stores, but consumers still need to evaluate what they’re buying. He says common sense can be the greatest helper in keeping kids safe this holiday season.