You are here: Home / Sports / Badgers beat Duke in a thriller 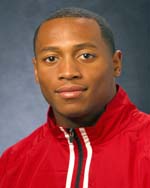 How big was Wisconsin’s Wednesday night win over 5th ranked Duke?  Big enough for the fans to rush the floor as the clock struck zero.

What a thrilling win for Bo Ryan’s Badgers (5-1), they led all the way and beat the 5th ranked Blue Devils 73-69 at the Kohl Center before a sold out crowd.  You could point to the win being the difference maker in the Big Ten winning its first Big Ten/ACC Challenge (6-5).

Trevon Hughes (pictured) played his biggest game as a Badger, scoring 19 of his team-high 26 points in the second half.  He hit two key free throws with 4.9 seconds left to give the Badgers a 72-69 lead.  Fellow point guard Jordan Taylor iced the win by hitting one of two free throws a moment later.

It’s the first loss for Duke in the Big Ten/ACC Challenge.  They’re now 10-1 in Challenge games.

The Badgers played well and took care of the basketball.  They dished out 17 assists and committed only 5 turnovers as a team.

Junior forward Kyle Singler scored 17 of Duke’s 32 first-half points and finished with 28 for the game.

The win for Bo Ryan is the 198th in Madison and the 581st overall win.