You are here: Home / Environment / Conservation / Going solar at the Capitol 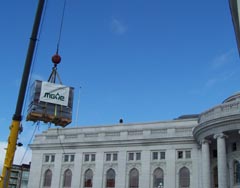 Workers hoist solar panels onto the roof of the Capitol.

The Governor is hoping for some sunshine at the state Capitol building.

Several new solar panels are being installed on the roof of the Capitol building, as part of a campaign to promote the renewable energy source. Governor Jim Doyle says the 40 panels will generate enough energy to heat an average home and will significantly help to reduce carbon emissions.

Doyle says it’s one of many efforts to increase the use of renewable energy sources in Wisconsin, since the state needs to focus more on how to produce its own power. Wisconsin relies heavily on coal, natural gas, and petroleum for its energy needs, which have to be bought outside of the state. As a result, Doyle says increasing the use of energy sources such as wind and solar can help keep those dollars in the Badger State.

The panels are being provided by Madison Gas and Electric, and the state will receive back 10-percent of the revenue from the power they produce. They’re being installed on the roof of the west wing of the Capitol building.