You are here: Home / Weather / Rain’s a pain 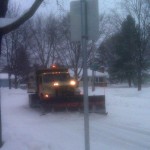 Plows were out in Madison on Tuesday

It’s beginning to look a lot like a wet Christmas Eve is shaping up across much of Wisconsin. A winter storm system will dump a messy mix of precipitation across southern Wisconsin Thursday through Christmas Eve, and Weather Central meteorologist Brian Olson says that’s going to be a mess.

“In addition to three quarters to perhaps half an inch of to perhaps an inch of rain, there’s a ton of snow melt” from the last winter storm which rolled through the region two weeks ago, dumping up to 16 inches of snow in some locations. “And this wasn’t a fluffy snow to begin with, so there’s a lot of water content in that,” says Olson.

And all that water will have to go somewhere, which has people like Janesville Operations Manager John Whitcomb concerned. “If residents have an opportunity to assist us . . . and if they are able to clear a catch basin . . . whatever kind of help they can provide in that regard between now and Thursday night would be most appreciated,” says Whitcomb. “We’ve been out since the big storm a couple of weeks ago, clearing catch basins. That’s ny big concern right now, being able to manage that rain.”

Olson says rain showers may carry into Christmas Day, meaning a lot of snow cover will be gone.