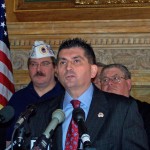 As expected, the state Board of Veterans Affairs is being sued, in the wake of a controversial decision to fire the secretary of the state agency which oversees services to veterans. Flanked by member of veterans advocacy groups, dismissed Wisconsin Veterans Affairs Secretary John Scocos said his firing by the board, shortly after his return from Iraq, was “a shame and dishonor” to the state and its veterans.

“We will take every and any available action to ensure that veterans’ rights – my rights as a veteran – are honored,” Scocos said. Those actions, spelled out by Madison attorney Jim Troupis, include a lawsuit against the board based in part on state and federal laws which bar the termination of veterans within one year of service. Troupis said the board conspired against Scocos. “This conspiracy to dismiss John Scocos began before his second deployment (to Iraq),” said Troupis. “It was ongoing.”

The veterans board had a scheduled meeting in Racine at the same time as the press conference, however that meeting was canceled. The board dismissed Scocos following a contentious meeting in Madison last month. Board chair, Marv Freeman, said he had no comment on the action by Scocos at this time.