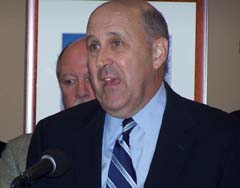 Legislation introduced at the state Capitol this week would set new clean energy standards for Wisconsin over the next several decades.

The Clean Energy Jobs Act is based on recommendations made by the Governor’s Task Force on Global Warming. It proposes the state set a goal of getting 25-percent of all energy and fuel from renewable sources, such as ethanol and wind turbines, by the year 2025. Long term, the measure also calls for the state to reduce greenhouse gas emissions to 75-percent below 2005 levels by the year 2050.

The bill would also institute a number of changes to building codes to improve energy efficiency and also set vehicle emissions standards.

Among the more controversial aspects of the legislation is the lifting of Wisconsin’s long standing moratorium on nuclear power. Doyle says the energy source needs to be considered as an option. However, he says it’s unlikely the first new nuclear power plant to be built in the U.S. in over 30 years will be built in Wisconsin.

Business groups have attacked the proposal, saying it will increase their costs and force them to cut nearly 43,000 jobs. Doyle argues the plan will actually help create over 15,000 new jobs.

Special committees have been created in both chambers of the Legislature to hold hearings on the bill. State Representative Spencer Black (D-Madison), the Assembly sponsor, says they hope to have the legislation passed and on the governor’s desk by Earth Day.