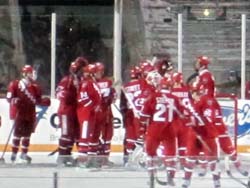 The 3rd ranked Wisconsin Badgers return to WCHA play with the first of a 2-game weekend series against Minnesota State-Mankato tonight at the Kohl Center.

With 8-games left to play, the Badgers trail first place Minnesota-Duluth by 4-points in the WCHA standings and senior forward Ben Grotting said they still have their sights set on the McNaughton Cup.

AUDIO: Ben Grotting says they have their eye on the prize. :20

Of the 8 games left in the regular season, only two of them come against a team that is currently in front of the Badgers (St. Cloud State / Feb. 19-20).

Minnesota State gained a home split against the Badgers back in October.  The Badgers are playing much better now than they were then, but Grotting said the Mavericks are better than a 9th place team.

Coach Mike Eaves said there’s plenty of motivation for his Badgers.  Eaves said he’s excited about his team’s chances, but he knows the WCHA is a real dogfight.