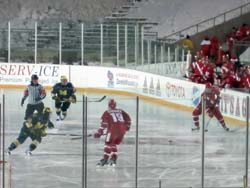 The 3rd ranked Badger men’s hockey team beat Michigan 3-2 to win the Camp Randall Hockey Classic before a school record 55,031 that were on hand for the event.

After the fell behind 2-1, Brendan Smith scored a pair of 3rd period power play goals to bring Wisconsin back for the win.

The crowd was the second-largest ever for a collegiate game and the largest to see a Wisconsin Badgers game, surpassing the 40,890 that watched the Badgers beat Ohio State 4-2 at Lambeau Field in Green Bay on Feb. 6, 2006. 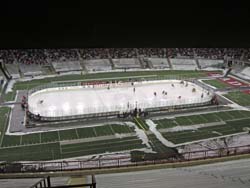 Michigan’s last appearance in a game outdoors was a 3-3 tie with Michigan State in the Cold War on Oct. 6, 2001.  A record crowd of 74,544 filled Spartan Stadium in East Lansing, Michigan for that game.

Wisconsin coach Mike Eaves called it a fantastic night for this event and a great time for all.

The Badgers remain in Madison this weekend to host Minnesota-State at the Kohl Center in 2-game series starting Friday night.