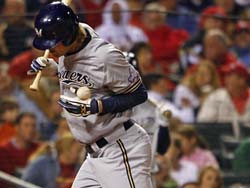 The Brewers had filed a $4.15-million figure and the two sides couldn’t ready any middle ground before Thursday’s hearing in Florida.

Hart made $3.25-million in 2009, a season that was interrupted by an emergency appendectomy on Aug. 2 that forced Hart to the disabled list for more than a month.