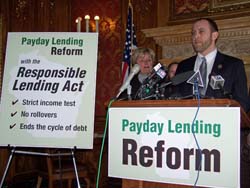 Assembly Democrats have announced a possible compromise on legislation that would regulate the payday loan industry in Wisconsin.

The bill would drop a proposed interest rate cap on payday loans, which the industry argued would make it nearly impossible for them to operate in the state. Instead, state Representative Gordon Hintz (D-Oshkosh) says loans would be limited to either $600 or 35-percent of a borrower’s bi-weekly income, whichever is lower. The limit would include interest.

Hintz says the provision would protect borrowers by requiring lenders to assess their ability to pay back a loan before it is issued.

The legislation would also prevent borrowers from rolling over what they owe or taking out a loan with another lender to pay off their current debt. State Representative Andy Jorgensen (D-Fort Atkinson) says that’s where many borrowers get into a cycle of debt they can’t recover from. He says nearly 90-percent of the revenue for the payday lending issue comes from borrowers rolling over their loans.

A statewide database would also track borrowers, preventing them from taking out multiple loans at the same time. Lenders would pay a transaction fee as well, which would help fund financial literacy programs.

Hintz admits the proposal could make it harder for some payday lending operations to stay in business. However, with 530 payday lenders operating in the state as of 2008, he says that would likely just mean cities would no longer have six or seven such businesses operating on the same block. He says the regulations promote a new business model, rather than one that’s based on low-income borrowers just transferring their debt from lender to lender.

The proposed bill would also ban the practice of making loans using an auto title as collateral. State Representative Josh Zepnick (D-Milwaukee) says those businesses just set up borrowers to fail, since they can end up losing the car they need to work if they miss a payment.

A coalition of Assembly Democrats hopes to have the bill voted on in the coming weeks, with the hopes of having a final version on the Governor’s desk before the end of the session. However, supporters admit their will likely need to be some changes made to the bill in order to gain the needed support.