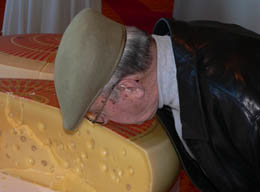 Wisconsin cheese is the topic of discussion at the state Capitol.

It’s “nacho” average legislation. State Senator Jim Sullivan (D-Wauwatosa) is sponsoring a bill (SB-327) to designate Wisconsin cheese as the official state snack, further hammering home Wisconsin’s claim as America’s Dairy State. The Wauwatosa Democrat says students at a middle school in his district came up with the idea in 2006.

One of those students from St. Joseph’s who thought it was a “Gouda” idea reveals his competitive spirit as he testifies at a legislative committee hearing.

Sullivan points out that no matter how you slice it, Wisconsin is number one in cheese production, with over 100 years of cheese-making experience. There are 1200 cheesemakers in the state, producing over 600 varieties of cheese, and accounting for over 25% of all the cheese made in the United States.

After four years before the bill’s first hearing, the 40 students are learning that lawmaking is a long process.

If the legislation passes “Muenster,” cheese would join 26 other official state symbols, including milk as the state beverage, cranberry as the state fruit, and polka as the state dance.