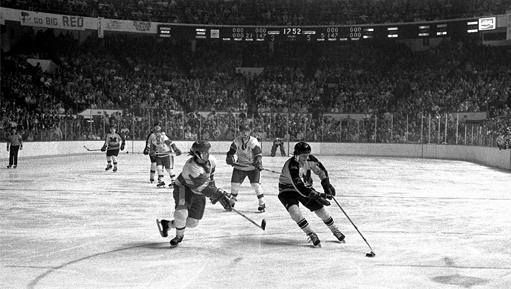 The Badgers won their first national championship at the 1973 Frozen Four. But, it was Coach Bob Johnson’s 1977 team that became the cornerstone of what would be a hockey dynasty.  The ’77 Badgers powered through the season behind the efforts of Mike Eaves, Mark Johnson, Craig Norwich, Julian Baretta and Steve Alley.  The successful year came to a climax with the NCAA Championship game against the Michigan Wolverines.

Wisconsin scored the first three goals, which came from Steve Alley (two minutes in), Dave Herbst (seven minutes later) and Mark Johnson (15 minutes into the period).  Michigan got on the board a minute after Johnson scored.  With the score 3 – 1 Badgers, everyone was feeling pretty confident.  Then, early in the second period, Michigan scored again.  But, Wisconsin’s Mike Meeker retaliated about two minutes after to put the score at 4-2.  Mark Johnson added another goal early in the third to give the Badgers a 3 goal advantage (5-2) but then Michigan marched back.  The Wolverines scored two goals in early minutes and then, with about five and a half minutes remaining in the game, Michigan scored again and sent the game to overtime.  Michigan’s come back was stopped 23 seconds into overtime as Steve Alley knocked in the game winner.

Steve Alley played left wing for the Badgers.  He told our Bill Scott that he remembers “every minute, every second of that game.”  He said it was only 23 seconds from the face off to the goal.  But, it was a long 23 seconds.  The goal was Alley’s 9th game winner o the season.  When asked what it felt like to hit the game winner in the Championship, he said, “It was the coolest thing I’ve ever done.”