You are here: Home / Legislature / Action against Wood delayed 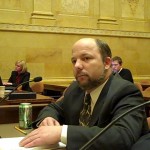 No action at the Capitol today, against a state lawmaker who faces three charges of operating under the influence. Committee chair, Rice Lake Democrat Rep. Mary Hubler, delayed action against independent state Representative Jeff Wood, subject of an expulsion resolution by Republican Representative Steve Nass. “The next process normally would be to have an executive session, but I was surprised that Representative Nass did not come today to give Representative Wood and his attorney (an opportunity) to be able to confront your accuser,” Hubler told Wood.

But Mike Mikalson, legislative staffer for Nass, said his boss doesn’t trust the process set up by Hubler. “This is about Democratic politics, this has been about needing Representative Wood’s vote, and the process has not been a fair and level handed one,” said Mikalson. Wood is an independent from Bloomer who has voted with Assembly Democrat on some legislation. Mikalson explained that Nass was in his district this morning but would be able to meet with reporters later today.

During his statement to the committee, Wood’s attorney, John Hyland of Madison, said the Assembly rules do not allow expulsion for the types of outside the Capitol offenses his client is charged with. “You don’t expel someone for violating somebody’s idea of a code, or somebody’s idea of morals or ethics,” said Hyland.

Wood, who spoke for some twenty minutes and related his version of events surrounding the charges, told committee members that he expects to be exonerated in two of those cases, that he has completed a treatment program, and has not had drink since last July. He said that neither he nor his constituents think expulsion is the proper course of action.