You are here: Home / Badgers / Badgers wrap up home schedule with Senior Night 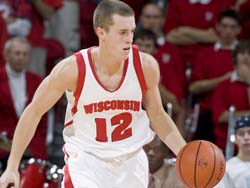 Once a defensive liability, Bohannon has picked up his game on both the defensive and offensive end.  Bohannon said his time has definitely passed quickly.

The Badgers are hopeful of moving up and gaining a higher seed, but their chances of gaining anything higher than a 4-seed appears to be slim.