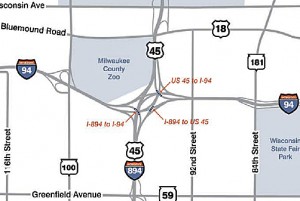 A heavily traveled bridge has been shut down by the state. “We’ve taken this action because of concern for the safety of the public,” says Department of Transportation spokeswoman Beth Cannestra on the agency’s decision to close the Highway 45 bridge in the Milwaukee Zoo Interchange.

“We had installed Weigh in Motion scales after we posted this bridge at thirty tons,” says Cannestra. Despite enforcement efforts by the Wisconsin State Patrol, trucks in excess of twice that posted weight limit have continued to use the bridge, hastening its deterioration and heightening safety concerns. Drivers should plan for congestion and delays. A replacement bridge is under construction and is due to be opened Memorial Day weekend.