You are here: Home / Recreation / Entertainment / Fighters gather for a pow-wow 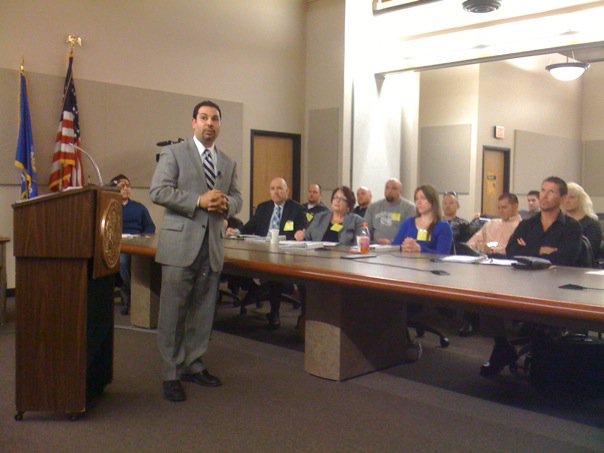 Mixed martial arts (MMA) industry insiders had their chance to chime in on upcoming sanctioning. The state Department of Regulation and Licensing held a town hall meeting Tuesday to work out the details of the new law. “We really want to involve the industry,” said DRL Executive Assistant Hector Colon, who is commissioner of the sport.

Colon adds there are other states that did not act in this manner and faced difficulty in doing so. Illinois is cited by industry insiders as an example of this. The Land of Lincoln combined single form martial arts into regulations covering mixed martial arts. This lead to “safer” disciplines like Brazilian Jiu-jitsu, which involves no kicking or punching in competition; being under the same rigorous standards as MMA, a full contact sport which combines several styles of fighting. Some jiu-jitsu promoters faced with uncertainty and bureaucracy in Illinois: crossed state lines to Wisconsin to hold events.

Under the new Wisconsin law, DRL will be appointing inspectors from the public who will be on hand in every bout.  Questions arose at the townhall as to whether promoters should be allowed to become inspectors. Some believe they would be the most knowledgeable candidates as inspectors, others considered it a conflict of interest to have promoters monitoring events run by their competitors.

“You’re going to run into a lot of conflict right now because the community is so small. Everybody knows everybody,” said Pat O’Malley who promotes fights in Madison.

A member of the nine-person panel advising DRL had a similar take, “It’s a young industry.  How many people are qualified enough to know, is that a ‘glob of tape on his hand or is it good hand wrap,” said Duke Roufus.

Colon told WRN following the meeting, “the department is not going move forward with anything where there may be a conflict of interest.”

MMA regulations were signed into law in February by Governor Doyle. It will require physicians to conduct pre-and-post fight physicals and mandates fighters to carry medical insurance.