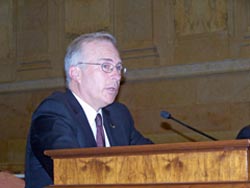 A state lawmaker is defending his push to kick a fellow member of the Assembly out of office.

State Representative Steve Nass (R-Whitewater) appeared before the Special Committee on Ethics Tuesday. The panel is considering a motion from Nass to expel Representative Jeff Wood (I-Chippewa Falls) from office, after he was arrested three times in one year on suspicion of driving under the influence.

Nass testified that Wood is lucky to only be facing expulsion and criminal charges, and didn’t harm any innocent people with his dangerous behavior.

During the hearing, Nass faced questions from attorney John Hyland, who is representing Wood. Hyland asked Nass why a lawmaker should be expelled when he’s only been charged with a crime, and not convicted.

Nass says an expulsion does not require the same level of evidence that’s needed in criminal proceedings. He says videos taken during Wood’s arrests already exhibits poor conduct that should justify throwing him out of office.

The Committee could vote on the expulsion resolution as early as next week. However, state Representative Mary Hubler (D-Rice Lake), who chairs the panel, says she’s not convinced the measure is justified, based on the evidence gathered by the committee.