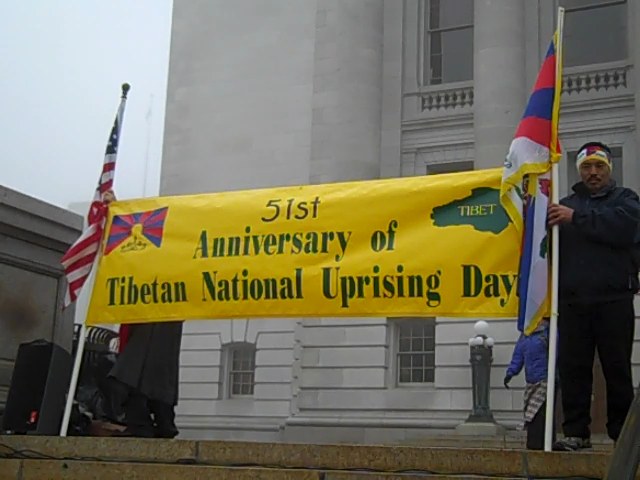 Rally on the Capitol steps

A rally at the Capitol Wednesday marked the 51st anniversary of the start of the Tibetan Uprising against Chinese occupation. Wisconsin Tibetan Association President Thubden Sangha said Tibet is in danger of being annihilated as a country and culture, as the government in Beijing moves more and more Han Chinese into Tibet. He said much of what happens in that country remains out of sight. “The Chinese government has always been trying to hide everything,” Sangha said. “It has tried to stop the peoples desires for freedom, for some kind of liberty to be able to do what they want in Tibet.”

Sangha said the Tibetan language and Tibetan religious practices are under increasing pressure, with Tibetans now a minority in two-thirds of their country. He said Tibetans are not asking for total independence. “What we want is a communication, an open dialogue between the Tibetans living in Tibet and the Tibetans living outside of Tibet,” said Sangha. That’s not always possible: many Tibetans living in the U.S. having no direct communications with family members who remain there. “My relatives, I’ve never been able to connect with them at all,” said Sangha. “My eldest brother . . . I’ve never even heard from him.”

Sangha said bringing the plight of Tibet to the attention of the rest of the world will help the Tibetan people, by pressuring the Chinese government to do more to recognize the rights of Tibetans and other minority groups in China. Sangha read a statement from the Dalai Lama, Tibet’s spiritual leader who is scheduled to visit Madison in May.