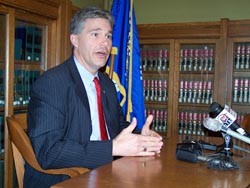 Wisconsin’s Attorney General is asking lawmakers and the Governor to let him file a legal challenge against the federal health care reform bill.

Attorney General J.B. Van Hollen says state law prevents him from challenging the bill signed by President Obama this week, unless the Legislature or Governor Doyle authorizes him to do so. He’s making a formal request to take action in a letter sent today to leadership and the governor.

Van Hollen says the challenge has nothing to do with the health care reforms included in the bill, but is based on requiring individual Americans to purchase health insurance. He says that requirement exceeds the powers of the federal government under the U.S. Constitution

If it’s allowed to stand, Van Hollen says it could have broad implications in the future and would allow Congress to require Americans to purchase just about anything.

Other states are planning legal action, but Van Hollen says we shouldn’t rely on others to represent the interests of Wisconsin.

With Democrats controlling the Governor’s office and the Legislature, it’s unlikely a lawsuit will be authorized. A spokesman for Assembly Speaker Mike Sheridan (D-Janesville) says there’s no interest to act on the request in that chamber. Van Hollen says he would like to think the Governor and lawmakers would like to preserve the rights of the state.