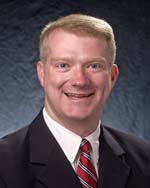 Wisconsin men’s hockey assistant coach Kevin Patrick has been named head coach of the new Muskegon USHL team that will begin play in the 2010-11 season.

Patrick will finish out the season with the Badgers, where he has spent the last five seasons as one of Mike Eaves assistants.  In his first year with the Badgers, the team captured their sixth NCAA championship, posting a
30-10-3 record.  Wisconsin finished second this season in the WCHA’s regular season and has compiled a 107-70-22 record during Patrick’s five years with the program.

It’ll be the first season in the USHL for Muskegon.

Prior to his tenure with the Badgers, Patrick served as assistant coach at Bowling Green State University (2002-05) and Union College (1998-2002) while also coordinating the recruiting efforts at both schools.  Patrick also had a previous stint in the USHL with the Green Bay Gamblers.  He spent the 1997-98 season as an assistant coach and assistant general manager.

As a player, Patrick was a four-year letterman at Notre Dame.  The defenseman captained the team during his final two seasons.