You are here: Home / Packers / Bulaga is glad to get down to work 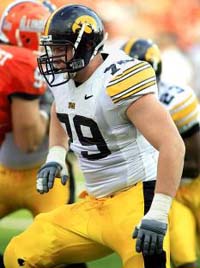 Packers first round draft pick Bryan Bulaga (pictured) is glad to have the draft process over so he can get on with playing football.

AUDIO: Bryan Bulaga is glad to put the draft process behind him :19

Bulaga met the Wisconsin media on Thursday at Lambeau Field.  He talked about team scouts questioning his ability because his arms are less than 33 inches long.

Bulaga won’t have a chance to work with mentor Chad Clifton this weekend, but he looks forward to not only competing against him, but learning from him.

Bulaga is expected to start out behind Clifton, but the Packers will get him ready to play if Clifton can’t make it in all 16 games this season.