You are here: Home / Crime / Courts / Censure for Wood, not expulsion 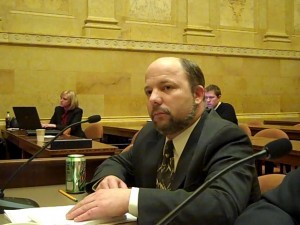 Members of the state Assembly have voted to censure an embattled lawmaker, rather than expel him from office.

State Representative Jeff Wood (I-Chippewa Falls) will be allowed to serve out the rest of his term in office, after the Assembly voted 73-24 Wednesday morning to censure him for misconduct in office. Wood was arrested three times this session for driving under the influence.

State Representative Steve Nass (R-Whitewater) had pushed for expulsion, and argued that censure only serves to underscore the Assembly’s inability to get tough on drunk driving. Nass argued Wood has shows a lifetime of poor decisions and he needs to be held accountable for those actions.

Many lawmakers argued expulsion was too extreme though, and could set the stage for future cases where lawmakers face being removed from office over their own legal troubles.

State Representative Mary Hubler (D-Rice Lake), who chaired the panel that considered the expulsion resolution, argued it would be wrong to remove Wood from office before all of the charges against him are resolved. Wood pleaded no contest this week in Columbia County to drunk driving, his third such conviction. However, two more cases are still pending against him in other parts of the state.

Wood is scheduled to begin serving a 45 day jail sentence next week in Columbia County. He is not running for reelection.