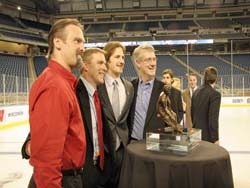 Geoffrion is the second leading scorer in the nation with 28 goals.  He’s also the nation’s top power-play goal scorer (15).

Geoffrion looks to lead the Badgers to their seventh NCAA title when Wisconsin (28-10-4) takes on Boston College (28-10-3) in the National Championship game tonight at 6pm at Ford Field in Detroit.