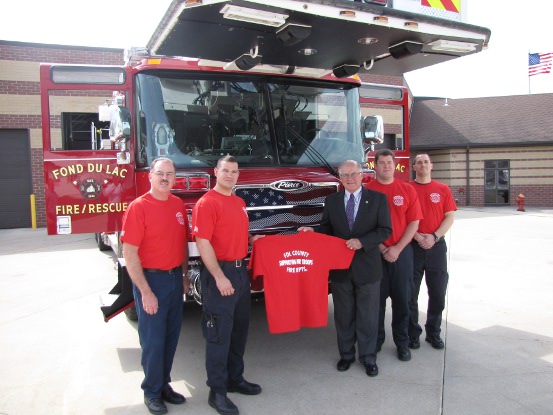 Starting May 7th Fire Departments across Fond du Lac County will be participating in the Red Shirt Friday program. It’s a nationwide program that shows support for U.S. troops. The Fond du Lac County Fire Chiefs Association has given it a bit of a different twist, with money raised from the sale of the shirts going to the Josh Wege Fund. Wege is a Campbellsport area native who lost his lower legs after a roadside explosion in Afghanistan. North Fond du Lac Fire Chief Paul Nelson says the chiefs from around the county voted unanimously to support Wege through the fundraising.

Campbellsport Fire Chief Jeff Lindsley says Josh plans to continue his military career. “When we met with him, it was extremely encouraging to see his attitude,” says Lindsley. “That young man wants to continue his military career, even though he has two prosthesis. Anything we can do to help him, I’m sure their family will defiantly appreciate it.”

Chief Nelson says eventually they will designate some of the funds for other veterans’ efforts. Firefighters will sport the specially designed red shirts on Fridays. The public will also be able to buy them for $10 apiece, a couple dollars more for plus sizes (at Hoppers in Fond du Lac).