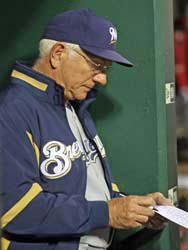 Ryan Dempster beat the Milwaukee Brewers for the fourth straight game and the Chicago Cubs rolled to a 8-1 win over the Brewers at Miller Park on Friday night.

Kosuke Fukudome and Tyler Colvin both homered, to back Dempster (2-0) who gave up just 1 run on 7 hits in 7 2/3 innings.  Dempster struck out four Brewers and walked only one.  He’s now 9-1 in his last 11 starts against Milwaukee.

Dempster also cooled off a Brewers team that out scored Pittsburgh 36-1 during their 3-game sweep that ended Thursday with a 20-0 win by the Brewers.  Brewers manager Ken Macha (pictured) chalked it up to baseball.  You score 20 one day and only 1 the next.

Jeff Suppan continued his struggles as a starter.  Suppan allowed 6 runs and 10 hits in just 4 1/3 innings and took the loss.  Suppan walked 2 and struck out 2 and knows he has to get better.

AUDIO: Jeff Suppan knows he has to get better :14

The Brewers and Cubs play game two of their series at Miller Park tonight.