You are here: Home / Politics / Govt / Van Hollen to run for second term 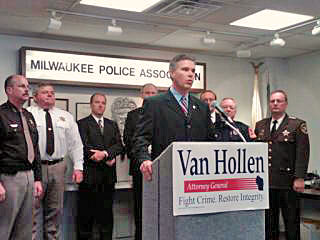 Van Hollen officially announces his reelection bid for a 2nd term as the state’s top cop.

It had been assumed, but it’s official now. JB Van Hollen is vying for another four years as Wisconsin’s attorney general.

“Even though it was assumed, I think it’s important to make it very clear to people that I have been honored to serve as their attorney general for three plus years and I look forward to hopefully doing so for three plus more years.”

Van Hollen makes his announcement in six major cities throughout the state, along with the support of law enforcement leaders. He says he’s being endorsed by 61 sheriffs and 50 DAs of both political parties because his office has done a lot to help cops do their job to improve public safety. Protecting kids, he says, is first and foremost.

“Helping to take child molesters off the streets… has always been my number one priority.”