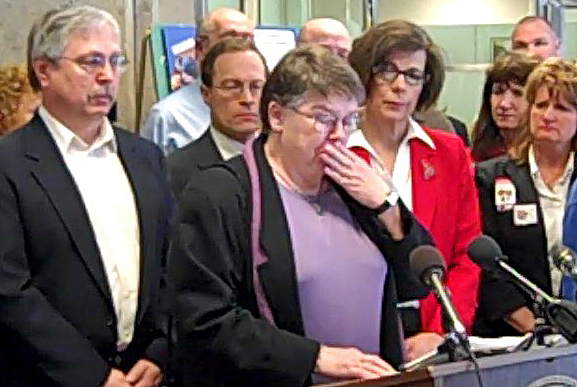 Putting a human face on the dangers of drinking in Wisconsin meant a difficult morning for Elizabeth and David Meyers. At a Madison press conference to mark Alcohol Awareness Month, Elizabeth recalled the August 2008 crash which killed the couple’s 22 year-old son Daniel. The driver lost control of the car at 90 miles an hour. The car slid into a tree and David, a UW grad with dreams of concert pianist, was killed along with everyone else in the vehicle.

The driver’s blood alcohol level was .144 and he had no previous record of drunk driving arrests. Lisa Maroney with AWARE – All Wisconsin Alcohol Risk Education – says that’s not an unusual situation. “In Wisconsin, over two thirds of the serious fatal alcohol crashes are committed by individuals who have had no prior OWI,” said Maroney. The state legislature has increased penalties for repeat drunk drivers in Wisconsin, but Elizabeth Meyers says tougher laws alone won’t alter the type of outcome which took her son’s life. “This is more than a drunk driving issue. It is a quality of life issue,” Meyers said. “Only changing the culture will alter this type of outcome.”

And while the media often focuses on tragic and high-profile drunk driving cases, a Madison doctor said alcohol’s impacts are widely felt. “We all know at least a dozen families affected by alcohol,” said Doctor Azita Hamedani, an emergency room physician at UW Hospital. “They may actually seem fine from the outside . . . but the truth is, what’s hidden from the public is shared with us daily in the emergency department.” Hamedani said ER doctors deal regularly with patients of all ages whose health is being negatively impacted by their drinking.

Monday’s press conference in Madison highlighted new efforts in Dane County, to reduce alcohol abuse. The Dane County Coalition to Reduce Alcohol Abuse is coordinating a local campaign, “Parents Who Host, Lose The Most,” which calls attention to the dangers of parents hosting alcohol parties for underage drinkers. The coalition and Madison-based CUNA Mutual are hosting a series of evening forums on alcohol abuse and related problems, during the month of April.