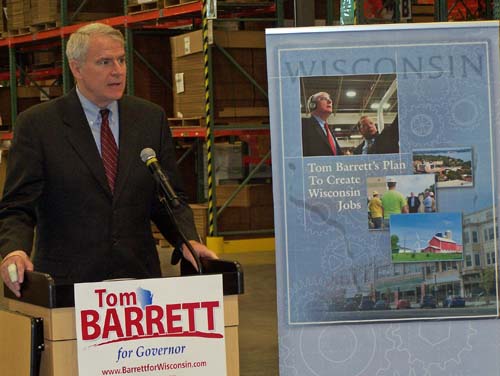 Democratic candidate for Governor Tom Barrett is outlining his plan to create jobs and grow the state’s economy.  The Milwaukee Mayor rolled out a five-part proposal on Thursday in Verona aimed at helping Wisconsin recover jobs lost in the recession.

Barrett says it includes dozens of specific proposals to improve the state’s business climate, encourage new investments and businesses to build in Wisconsin, and create good paying jobs that are needed to boost the state economy.

The Republican candidates for Governor both criticized Barrett’s plan, with Milwaukee County Executive Scott Walker saying it would raise taxes on businesses and grow government. Former Congressman Mark Neumann questioned how Barrett could create more jobs in the state, when Milwaukee has seen some of the biggest losses in the country under his watch.