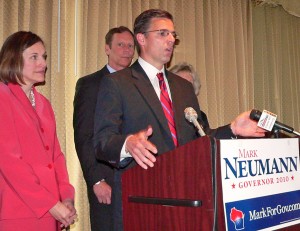 John Gard wants Mark Neumann to be Wisconsin’s next governor.

The former state Assembly Speaker is a co-chair of Neumann’s gubernatorial campaign. Gard says he’s got a lot of respect for his former Assembly colleague and current Milwaukee County Executive Scott Walker — who’ll face Neumann in the primary election — but Gard believes Neumann is best suited to be the state’s chief executive.

“The economic foundation is starting to crumble.”

Zueske says as a businessman, Neumann has proven that he knows how to run a business and can create the jobs our state desperately needs.

The Republican duo from Peshtigo says this decision wasn’t made lightly. They put a lot of “prayer, thought and energy” into their decision to support Neumann. Gard says, “Nobody has sacrificed or given more than the Neumanns.”