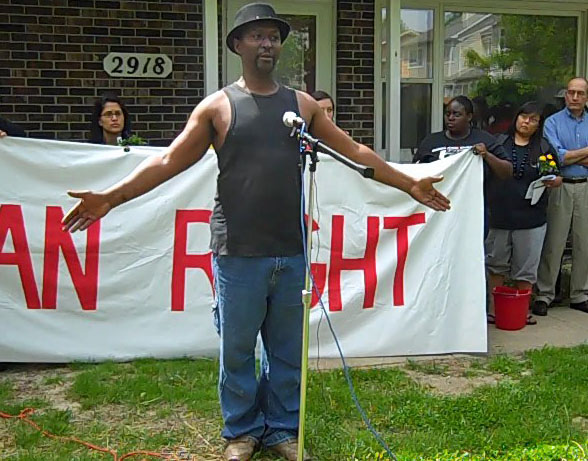 As police officers watched from across the street and at least one disgruntled neighbor fumed, the homeless advocacy group Take Back the Land was out readying another vacant Madison property for occupancy on Monday – although whether a homeless family will ever reside there remained unclear. “We at this point have families that are interested in finding housing, we don’t have anyone that’s specifically looking for this one right now,” said a spokeswoman at the end of a forty minute long media event in front of a duplex (2920-2918 Turbo Drive) on Madison’s south side.

Members of Take Back the Land-Madison and Operation Welcome Home were in the home to clean up and prepare it for occupancy. They noted that the foreclosed home is now owned by Freddie Mac. The group said they specifically targeted Fannie Mae and Freddie Mac, because they have received billions of dollars in federal bailout money. A home in which a Madison woman and her two children were briefly placed in last week was owned by Bank of America. That family left after just a couple of days, after being asked to leave by Madison police.

As the cleanup commenced on the South side duplex, Madison Police Captain Joe Bailles said they’d informed the Realtor, who was working to confirm that Freddie Mac does indeed hold title to the property. “We’re not going to put an officer out here or anything like that,” said Bailles. “We’ll be in discussion with First Weber and with Freddie Mac, about what our next moves are going to be.”

Robert McGee, who said he’s a former resident of the duplex, claimed that the property was being vandalized. Max Remeau, coordinator for the national Take Back the Land movement, compared the group’s activities to the civil rights movement. “We think that the laws here, which support the idea that a bank has a right to keep a home vacant while getting billions of dollars of bailout, is immoral, and housing people . . . is moral.” One neighbor who spoke with reporters but who declined to give his name was unmoved by the afternoon’s activity. “It doesn’t matter if it’s empty or not, it doesn’t give them the right to just be able to go into that building,” the man said. “They don’t have the right to think they can just move in and not pay rent. I have to pay rent.”