You are here: Home / Sports / Killebrew to speak at Northwoods All-Star Banquet 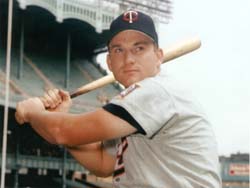 The Eau Claire Express announced that National Baseball Hall of Fame member Harmon Killebrew will be the guest speaker at this year’s Northwoods League All-Star banquet.  The July 19th banquet precedes the league’s 16th annual all-star game which will be played at Carson Park on Tuesday, July 20th.

Killebrew, an 11-time American League all-star and the league’s Most Valuable Player in 1969, became one of the most feared power hitters of the 1960’s, belting 40 homers in a season eight times and hitting the most home runs of any player during the 60’s.

Killebrew hit 573 home runs in his career while driving in 1,584 runs.  In 1984, he was elected into the Baseball Hall of Fame, becoming the first Minnesota Twin to be so honored.