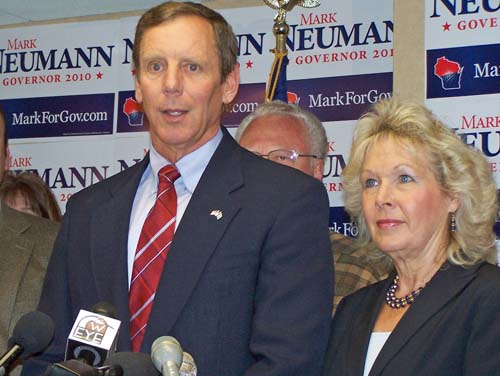 One of the Republican candidates for governor doesn’t want his party’s endorsement.

Just a week out from the Republican Party of Wisconsin’s state convention in Milwaukee, GOP gubernatorial candidate Mark Neumann is asking leaders to remove his name from the ballot for an official endorsement from delegates.

Neumann says he will be attending the convention and hopes to speak to delegates, but he feels it should be up to the people of Wisconsin who the party’s nominee will be.

The former Congressman says the race between him and Milwaukee County Executive Scott Walker is very close, and says history has shown that an endorsement doesn’t always show who will win the nomination. He points to the 1978 campaign between Lee Sherman Dreyfus and Bob Kasten. Kasten earned the GOP endorsement, but it was Dreyfus who went on to win the primary and the Governor’s mansion.

Neumann admits that Walker was the favorite to earn the convention endorsement, and his request essentially means he’ll likely win it with 100-percent of the vote. Although, Neumann ads that Walker was likely to win because he’s been courting party members for the past six years to back his campaign.

Walker says Neumann’s decision runs contrary to campaign efforts from earlier this year, where he had reached out to party members to earn their support. Walker says the request shows grassroots members of the party are putting backing his campaign.