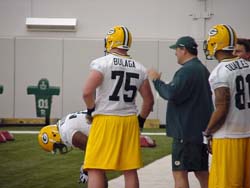 The Green Bay Packers got their draft choices and other rookie and first year players off on the right foot.  Mike McCarthy wrapped up his 3-day Rookie Orientation mini-camp with a workout on Sunday morning.  McCarthy said it was a good weekend for his young players.

The Packers spent a lot of time this weekend working on special teams, which was an area of weakness for the Packers a year ago.

McCarthy liked the performance of his offensive and defensive lineman during the 3-day camp.  McCarthy said there’s clearly more size in this group.

Next up for the Packers is the start of OTA’s in about two weeks.