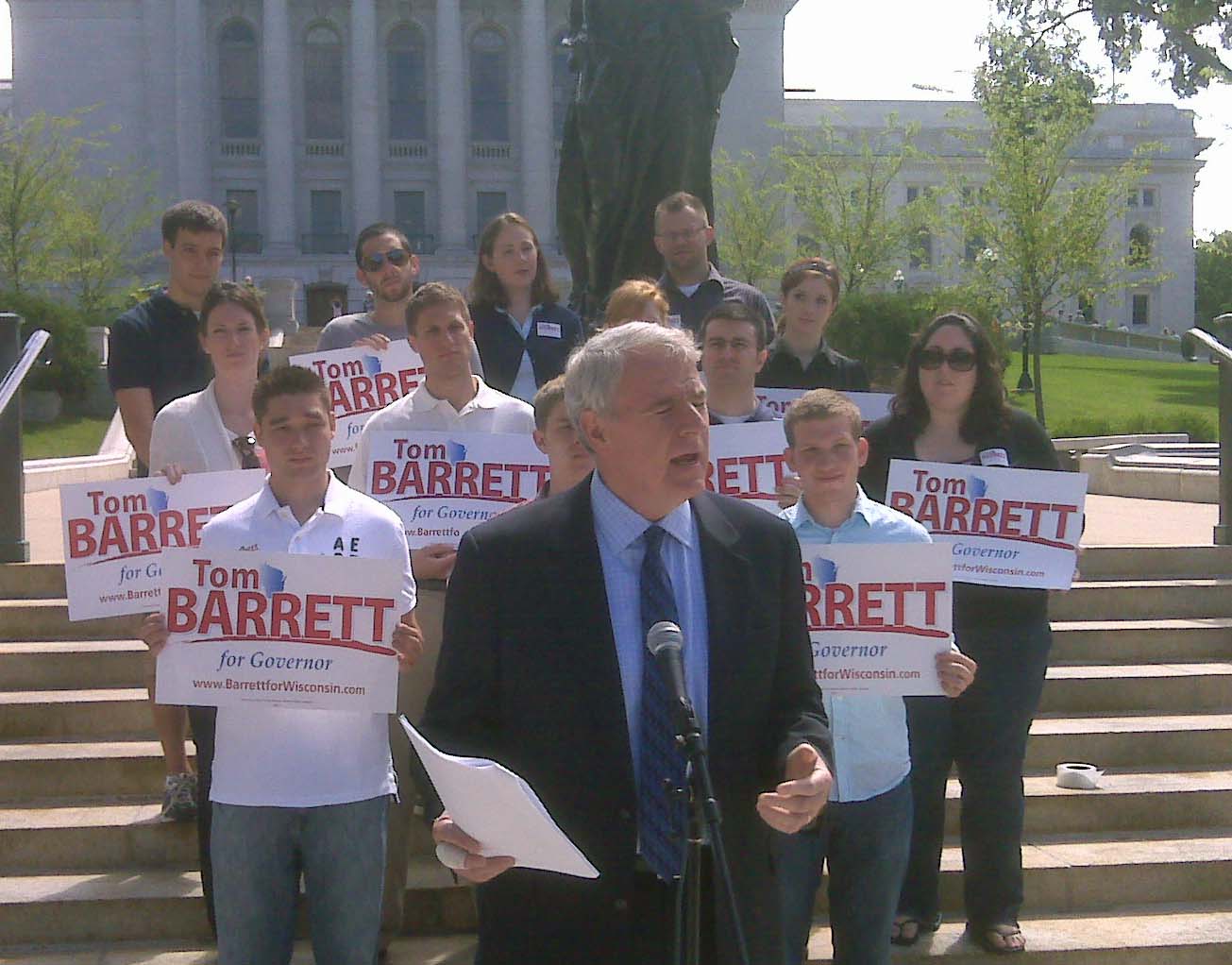 Tom Barrett says he has a track record of dealing with tough budgets, and that he’s “a Democrat who knows how to balance a checkbook.” The Milwaukee mayor and Democratic candidate for governor said he’ll put Madison on a diet and “right-size” state government, without resorting to the massive tax cuts proposed by Republican candidates. “We’re going to be requiring every department to have a top-to-bottom review, so that we can see what size we need to have,” Barrett said during a Monday press conference outside the state Capitol in Madison. “We’re also looking to do that in areas pertaining to sick leave . . . benefits, making sure that the benefits for state workers are in line with the private sector.”

Barrett also wants to eliminate unneeded bureaucracy: the constitutional offices of Treasurer and Secretary of State would be eliminated, and their duties absorbed by the office of the Lieutenant Governor. Barrett said he can save state taxpayers more than one billion dollars without cutting taxes as proposed by GOP candidates Mark Neumann and Scott Walker. “What both major Republican candidates have proposed are four tax cuts, none of which are aimed at the middle class, none of which are aimed at the working people of this state,” Barrett said. “According to the Legislative Fiscal Bureau, the total amount of those four tax cuts is $1.8 billion. And so you take the $2.3 billion structural deficit that already exists, you add those four tax cuts, and you would have a state government which overnight would have a $4.1 billion hole to it. The challenges that he would have would be huge.”

“I want to identify cuts here, grow this economy and achieve a true, honest balanced budget,” said Barrett. “What we’re looking for is transparency, accountability, a responsible budget and a responsive budget.” Barrett said his plan, while not an actual budget document, could save taxpayers more than $1.1 billion if implemented. “That’s what I’ve tried to do as mayor,” he said. “There are going to be criticisms from the other side for me, I realize that. I’m not Gomer Pyle coming to the state Capitol, I know what’s coming, but that’s why I think it’s important for me to be specific. I’m a Democrat who knows how to balance a checkbook.”

Barrett insisted that this diet is in fact a serious proposal for trimming the size of state government. “We’re trying to identify in the real world, real programs with real dollars attached to it, where we believe we can achieve savings. Will we be able to hit all of these? I would be surprised if we did. Do we want to hit most of them? Absolutely.”