You are here: Home / Health / Medicine / Getting the word out on the smoking ban 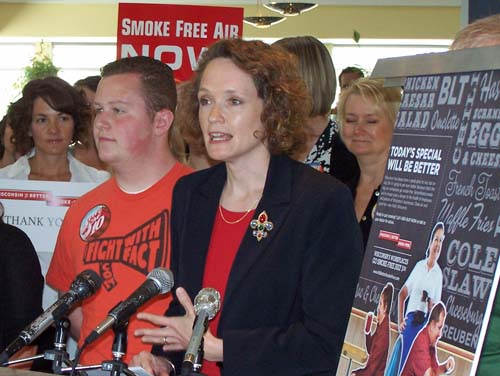 The Department of Health Services is launching a media blitz to raise awareness of the statewide smoking ban.

The ban on smoking in most public spaces goes into effect on July 5th, and DHS Secretary Karen Timberlake says a series of radio, print, and internet-based ads will begin going out this week to make sure people know it’s coming.

Timberlake says the ads focus on the improved health of employees and the health care savings for the state. It’s estimated that tobacco use costs Wisconsin nearly $3 billion each year in health costs and lost worker productivity.

As the ban approaches, many communities will face going smoke free for the first time. Timberlake says she’s confident businesses will begin enforcing the ban voluntarily, even in rural areas where there could still be opposition.

A recent change to the ban clarifies the rules for outdoor areas where smoking will be allowed if at least 25-percent of the walls are covered by windows. Timberlake says officials are not concerned about businesses trying to use that as a loophole to still allow smoking inside.

Timberlake says enforcing the ban will be left up to local law enforcement and the Department of Justice.