You are here: Home / News / Hope for highway expansion 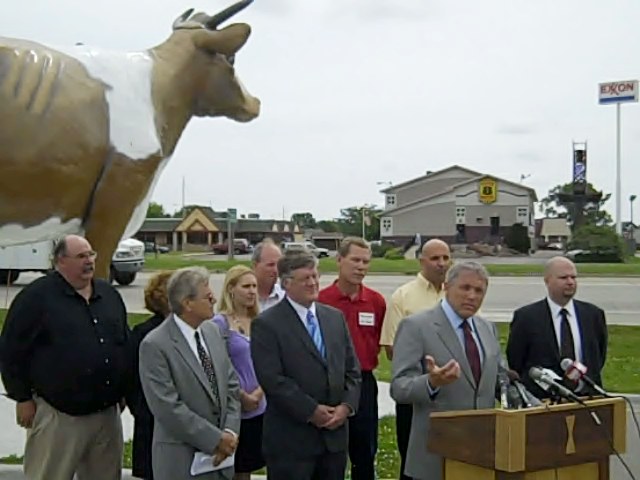 A drive to expand a portion of the Interstate in southern Wisconsin moves forward.

Plans to expand from four to six lanes the section of I-39/90 spanning from the Illinois border at Beloit through Janesville to Madison take one step forward.

Transportation Secretary Frank Busalacchi says the project’s environmental impact study has been submitted for federal consideration. “Planned improvements for the corridor would include reconstructing the existing four-lane divided interstate highway and adding an additional lane in each direction to create a six-lane highway, rebuilding 11 interchanges and modernizing the ramps.”

State Assembly Speaker Mike Sheridan of Janesville joined the Transportation Secretary at the Janesville Oasis Wednesday morning. “We know that this is really part of the next step for the success of not only Rock County but the state of Wisconsin. And I believe that transportation is a critical component for our state’s economic development. Good roads support and attract strong businesses.”

Dan Cunningham, Vice President of Forward Janesville, a group advocating for the project, says it will create jobs — in the short-term in construction, and in the future as the infrastructure improvements attract major employers.

Busalacchi says the slightly more than $1-billion dollar project could begin in 2015, and last for five years. Despite the big announcement, the project is neither budgeted nor scheduled.

DOT traffic counts in 2002 for this Interstate segment are as high as 60,000, averaging more than 600 crashes a year.