You are here: Home / Politics / Govt / Insider plot to force Neumann out? 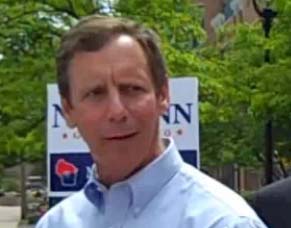 The plot thickens in the Republican race for governor. Former congressman Mark Neumann reacted Monday to reports that Republican insiders are working behind the scenes to get him out of the GOP primary for governor. “We obviously struck a nerve, and that’s when we’ve been getting this kind of push back from these guys,” said Neumann. “We’re seeing this sort of activity, I guess, because they’re very much afraid that this race gas tightened as much as it has, and they’re trying to do everything in their power to stop it.”

Milwaukee Journal Sentinel columnist Dan Bice reported Monday on an e-mails sent by a former staffer for Governor Tommy Thompson which urged other party insiders to work on getting Neumann out of the race.

Neumann again insisted he’s in the race all the way to September’s primary. “In America, we’re supposed to be able to run for office if we want to, and the people are supposed to decide who their nominee is going to be. It just feels like political bigwigs are trying to bully us out of the race, and we’re just not going to let that happen.”

Mark Jefferson, executive director of the Republican Party of Wisconsin, has insisted he doesn’t have a problem with Neumann’s continued candidacy. “To have two candidates out there giving the Republican message of fiscal responsibility and living within our means to voters is a good thing,” Jefferson said outside the state Democratic convention in Middelton over the weekend.