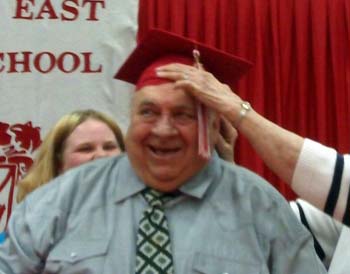 A Wausau man earns his high school diploma — 57 years late. Ted Ulrich graduated from Wausau East High School on Tuesday night. He was supposed to graduate in 1953 but quit school in the fall of his senior year to join the Marines and fight in the Korean War. Ulrich said he really wanted his diploma after all these years. “I did it for my mother and day, because it really bothered them that I quit high school and went into the service, because I was an only child,” Ulrich said. “I really did it for them.”

Ulrich’s wife placed his mortarboard cap and tassel on his head, as his family joined him on stage. The 75-year-old said he wasn’t ready to celebrate until his whole family could join him from out-of-town. The Wausau school board approved giving Ulrich his diploma in March after it found he had met the requirements for graduation. He was among 270 students who graduated from East High. Principal Brad Peck said Ulrich probably learned more in the Marines than he did in his senior year. “I don’t think any of us could really understand or comprehend combat,” Peck. “I’m sure he learned a great deal more. It’s just an honor to be able to give him this diploma. Wonderful man, wonderful family.”