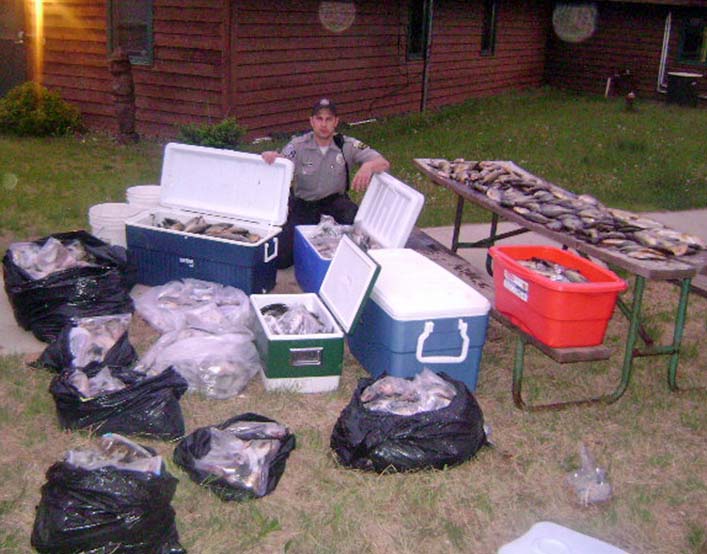 An investigation related to the May 21 arrest of 13 Milwaukee men for having more than 2,000 fish over their possession limit is continuing. Department of Natural Resource law enforcement officials are talking to other people in Sawyer County and Milwaukee County who may also have been part of the Chippewa Flowage over bagging violation.

“Based on our investigation so far, we believe there may have been others involved in this gross over bagging case,” said Sawyer County conservation warden Sue Miller. “We are working with the wardens in Milwaukee to find out how many people were involved.” The case is the result of two anonymous tips about the men taking too many fish – 2,238 over their bag limit. It took DNR officials about six hours to count the fish that were contained in coolers, tubs and plastic bags.

Miller added that while those convicted face large fines and license revocations, the harm caused the fishing resource and taking opportunity away from other anglers is also a major concern. DNR fisheries biologist Dave Neuswanger said fishery scientists have been documenting overharvest of panfish throughout the Midwest, even when reduced daily bag limits are in effect. Studies have found that while overharvest did not affect overall panfish numbers greatly, the proportion of preferred-size fish — crappies over 10 inches or bluegills over 8 inches — become severely limited “And the waterbody lacks the fish needed to sustain quality fishing,” Neuswanger explained.

Wardens are pursuing leads that others in the Milwaukee area also overbagged. All of the subjects, said Conservation Warden Supervisor Rick Rosen, are in some form related to the group of 13 men that had fished the flowage. Currently the Milwaukee group faces a total forfeiture for all citations and restitution of $27,826.42 and additional violations of $43,456.50 for a total potential forfeiture and restitution of $71, 282.92. While license revocations could go up to three years for all privileges, the DNR is asking one to two years for fishing only.