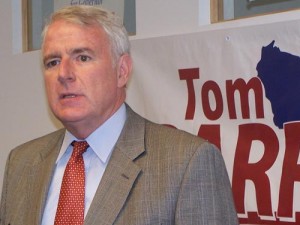 A Democratic candidate for governor wants more disclosure on when lobbyists and state officials meet.

The proposal from Milwaukee Mayor Tom Barrett would require heads of state agencies, cabinet members, and other appointees of the governor, as well as lobbyists, to file a report within 48 hours of any contact they have with each other.

Barrett says it’s intended to address a growing public perception that only those with money have access to decision makers. He says requiring that information to be available through the Government Accountability Board would help to improve transparency of how government is doing business.

Barrett says the requirement shouldn’t be too difficult for lobbyists to comply with, since they typically are recording those meetings anyway so they can bill clients.

The proposal is similar to one already offered by Barrett’s campaign to make state lawmakers and lobbyists report their meetings.

Barrett is also proposing a ban on top state officials going to work as a lobbyist within one year of leaving the administration.

He says the rules could be created through an executive order, but he’d push for legislation on the issue as well.