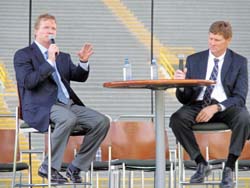 shareholders meeting on Thursday as an invited guest of Packers President and CEO Mark Murphy.  Goodell’s told the crowd of nearly 8,300 shareholders that the league’s #1 priority is to reach a new collective bargaining agreement.  Goodell also said he’s optimistic about reaching a new deal.

AUDIO: Roger Goodell is optimistic about an agreement :21

The Packers financial numbers would indicate that changes have to be made when a new deal is reached.  The Packers finished the fiscal year with a $5.2-million profit, but team President Mark Murphy said the Packers were burdened by the explosive growth of player costs.  The numbers show that player costs had grown at twice the rate of the team’s revenue, which hit a record $258-million last year.  Murphy said local revenue, which totaled just over $100 million, has flattened out.

Murphy said the numbers have been going in the wrong direction for the last four years.  The teams operating profit is down to $9.7-million, from $20.1 million in fiscal year 2009.

AUDIO: Mark Murphy says the system has to change :21

The Packers are making an attempt to increase local revenue, which doesn’t have to be shared with the league.

Inside the stadium, the team is talking about increasing capacity with an expansion of the south end zone.

Outside the stadium, the Packers are talking with Hammes Co., the same consultants that they worked with on the renovation of the Lambeau Field back in 2003.  It’s referred to as the “Titletown Development District”.

Jason Wied, the team’s general counsel, said there is potential for hotels and restaurants, retail areas, a possible youth sports complex and exhibition space that could total 100,000 square feet.

Murphy said there’s no timetable for such a major investment, nor does the team have any specific funding plans.