You are here: Home / Weather / Southern Wisconsin pounded by storms 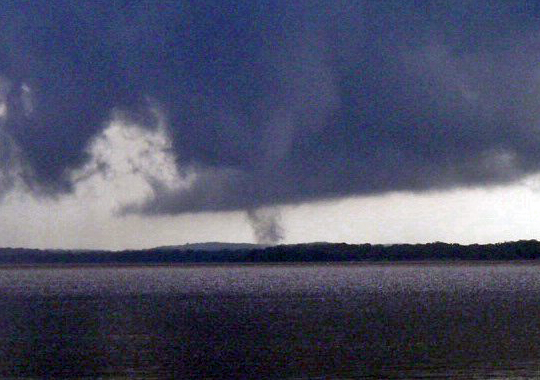 Southern Wisconsin was hit hard by storm activity that including a stretch of tornadoes, thunderstorms and flooding late Thursday afternoon into the evening.  Six-to-eight tornadoes were reported throughout the state from Ridgeway to Racine County.

“So far it seems like damage from tornadoes have been relatively minor. Most of the damage seems to be from the flooding,” said Wisconsin Emergency Management spokesperson Lori Getter. The National Weather Service is sending out survey teams to determine if there were any tornado touch downs, and assess possible damage.

Milwaukee and Madison both broke daily rainfall records with Milwaukee unofficially reaching eight inches of water in some areas. Cecilia Gilbert of the city’s Public Works Department said entire neighborhoods in one area received “extreme damage.” Many homes had two-to-three feet of water and in a number of cases, people lost everything in their basements. By three this morning, she said over 1,100 Milwaukee households complained of water in their basements.

Two people were injured while being struck by lightning. Media reports said two sisters were hit by lightning on Milwaukee’s south side while returning home from dinner. They were taken to a hospital, but their conditions were not immediately released.

We Energies reported 32,000 customers in southeast Wisconsin were without power during the height of last night’s storms. Mitchell International Airport shut down and officials say it won’t be until at least noon until they open up.

Getter says so far there has been no request for state assistance. Wisconsin Emergency Management is concerned about scattered storms expected this afternoon and heavier storms tonight headed for the same areas. Meanwhile flood warnings are in effect for a number of rivers in Southern Wisconsin.