You are here: Home / Badgers / Burish delivers the Stanley Cup

Adam Burish has the Stanley Cup until midnight tonight.  The former Badger 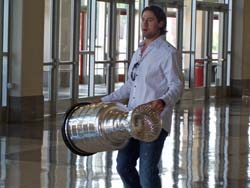 hockey star helped the Chicago Blackhawks win the Cup for the first time in 49 years this past season.  Every member of the Blackhawks team gets to have the Cup in their possession for a day to day and a half.

Burish received the Cup on Tuesday afternoon.  He toted it to the Kohl Center in Madison this morning for a viewing and photo opportunity and then signed autographs for fans.  Burish grew up in Madison.

So now that his Kohl Center duties are over with, what will Burish do with the Cup until Midnight tonight?

As crazy as it sounds, probably nothing that hasn’t already been done with the Stanley Cup.