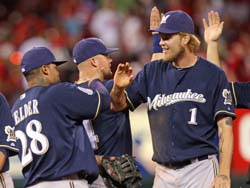 deadline over the weekend, the Milwaukee Brewers signed the right fielder to a three-year contract extension through 2013.

Hart was named to his second All-Star game this season and started in right field.  He owns a .275 career batting average.