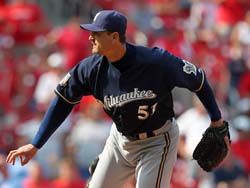 with a home run as the Milwaukee Brewers completed a three-game sweep of the Pittsburgh Pirates with an 8-4 win on Sunday.

Hoffman entered with one out and two runners on base in the 9th.  He retired both batters for his 599th save.  Hoffman said he’s love to get save #600 in front of the home crowd.

AUDIO: Trevor Hoffman would like to pick up 600th save at home :10

Hoffman lost his closer’s job to John Axford earlier in the season, but manager Ken Macha has allowed Hoffman to get some opportunities in the past few weeks.  But Macha said there’s no guarantee Hoffman’s next chance will come at home.

The Brewers scored all 8 of their runs in the first 3 1/3 innings off of Pirates starter and loser Charlie Morton.

The Brewers open a series in Cincinnati tonight.